Delores asked the question of the LBC. Doesn't it usually look like a release from toil, care and worry? A release from pain and fear?
Well, my business system failed today and I had to get another system, build it to what I need - and it is still not complete well after midnight. So, this is what Heaven looks like to me right now: 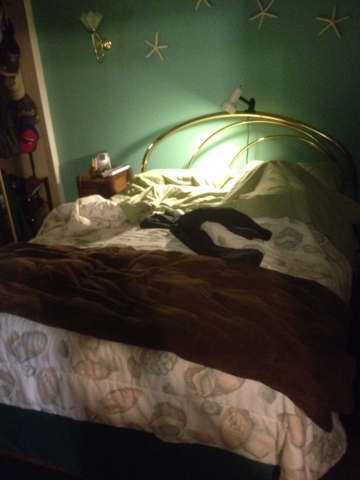 Translation: I am working to bring funds back up to normal!

Just thought you wanted to know why the spotty writing schedule.  Right?  Hello?

Speed bumps on the road to the ashram …

As all the readers of this blog know, my friend Ramana Rajgopaul let it slip in a comment that he was actually Superman.  At least that is the way all of us had to interpret it, given many of the mysteries surrounding his secret identity.  That and the fact that he pretty much just said it.

With me being his sidekick, he had the right to label me and has done so quite accurately as a philosopher and misguide, which is calling for an interesting choice in superhero attire.  However, we thought this was the perfect situation for us to open an Ashram in America and it was my task to procure a good location in the Western World where it can do the most good.

Unfortunately, the ARP (American Reality Police) has intervened, fined us heavily and hindered our cause considerably.

The above photo is from a surveillance camera showing Ramana being confronted right after he and I had partaken of lunch.  Of course, I was inside, tipping the waitress.  Don’t worry, though, she is OK.

This topic was brought to the Loose Blogger Consortium (listed with clickable links on the right, so check their takes on the topic out) by Paul of Blackwatertown fame.  Tough one, Paul.  Tough one. 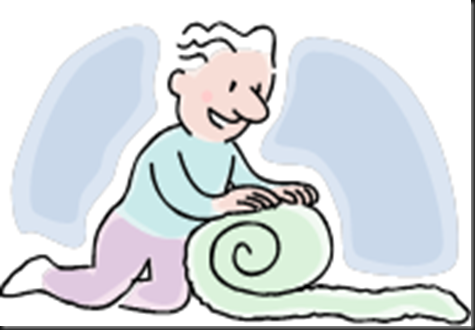 I'll let the readers decide what is the most odd.
Man, I've had a really boring life!  At least, a sleeping life.  Paul must have a doozy, though, or he wouldn’t have brought this up!
Posted by The Old Fossil at 7:00 AM 8 comments: 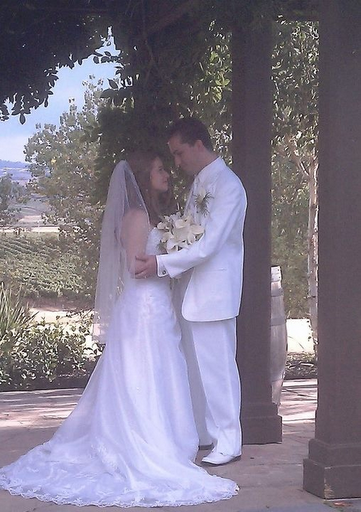 The "official" pictures haven't been released yet and I will overload you with those when available.  In the meantime, this is a picture posted on Facebook by a friend and I loved it. It shows the setting so nicely, with the vineyards in the background that are so much a part of Northern California.  Lovely!
Posted by The Old Fossil at 10:40 AM 5 comments:

The End of Our World?

No, our world hasn’t actually ended, but we have certainly turned the page to a new chapter.  Photos are coming, but be it known that Lafawnda and Flash are safely back in their world mostly enhanced by a lot more kitchen appliances.  Everyone was exceptionally generous with them and Lafawnda has invited the Lady F and me down to their place for Thanksgiving!

Now, if that doesn’t help it sink in to us, nothing will!

It was 38 years ago.  We were sitting around a campfire on a warm summer evening in Kansas.  We had just smoked a joint and were enjoying the patterns of the flame.

George said, “The flame is the perfect electrical conductor.  That’s the answer.”

George was like that.  He always just pulled some idea out of the ether, never bothering to encumber it with connection to anything in particular.  I remember thinking, “Great, George.  If that’s the answer, now all we have to find is the question.”

It’s taken me 38 years, but it finally came together.  The question was, “What do I write about fire for this week’s topic?”

The topic was brought to us by Will Knott.  Check out what the other members of the Loose Blogger Consortium, listed on the right hand side of the page, have to say about it.  I’m willing to bet that most of them took less than 38 years to put it together.

A visit from the Queen

As many of you know, the Queen of my old blog was my mother, Ma Fossil.  Well, she’s back – for Lafawnda’s wedding - and in style: 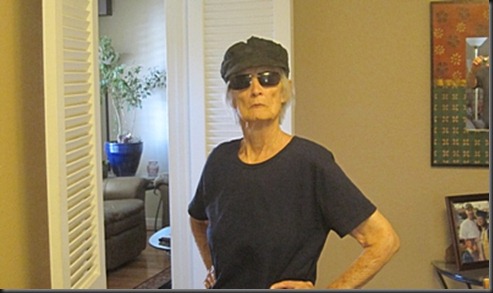 And, just in case you feared she was losing her edge with all her royal duties, she decided to show you a little attitude! 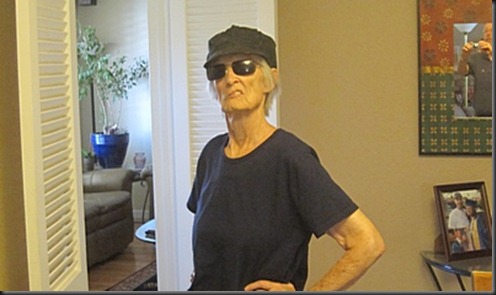 She is the Queen after all!

Been busy – wait, let me redo that, BUSY!!! – lately with my daughter’s wedding which was an absolute joy!  So, I’m late to this party, the Friday Topic of the Loose Blogger Consortium.  Check out the other writers with links on the right side of my page to see what they wrote on this topic.  And, try to figure out what editing they did along the way … 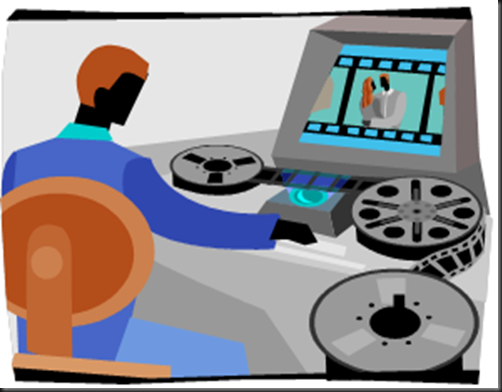 One of my jobs in the early 80’s was to run the data import department for a leading Bay Area typographer.  Vera’s shop was top of the line for its time!  I took in data sent on disk or over the phone line (in the days when FAST transmission was over a 2400 baud modem and 300 baud still was operating for many); back when coding the data on the fly for the text editing department was essential and high-level functioning; back when manual cutting and paste-up was done by Bob in the art department; back when there were no spell checkers that didn’t have actual DNA.  And we were GOOD!

How good?  One day, we were looking at a fully published book of ours and found a single typo.  We were mortified!  How could it happen?

Now, shackman may be one of the few who know about the technical piece I’m going to mention next, for shackman and I worked together at the place that supported Vera’s computer operation until I moved on and became a member of her staff.  The technical precision at Vera’s went down to the level of manual kerning of letters in the text until it looked precisely right!  Kerning is the art of moving individual letters closer to or further apart than they standardly are produced by equipment so that they are more pleasing to the eye!  A capital “W” next to a lowercase “a” needs to be squeezed together a bit, for example.  No two fonts required the same amount of kerning.

Perfection was the only acceptable end to us.  Literally.  The beauty was that it wasn’t forced on anyone, everyone desired it for their own reasons.  Vera soothed people when there were mistakes, not confronted them.  And, now, I am sitting next door to the man who officiated my daughter’s ceremony, the man whom I have considered a brother for many a year, the man who edited and re-edited the ceremony itself for six months, the man editing the pictures his wife took at the ceremony.  She served as the photographer (because she’s just that good!) and their son served as our DJ and Master of Ceremonies.  Their daughter served as a Bridesmaid and is like Lafawnda’s sister. The picture editing will be perfect when it is done and my friend will put in all the time it takes until each picture is just so, those that are keepers out of the 1400+ that his wife took!

There is a huge soft spot in my heart for people so dedicated to other people through art.  We promised the kids we won’t show you any of the pictures until they return from their honeymoon and they can see them first – so hold on for a bit, Grannymar!  The one I have shown you was taken by me.

But our appreciation for what our close friends are doing is enormous!  We are taking their whole family out to dinner tonight at the finest Italian Restaurant in town. 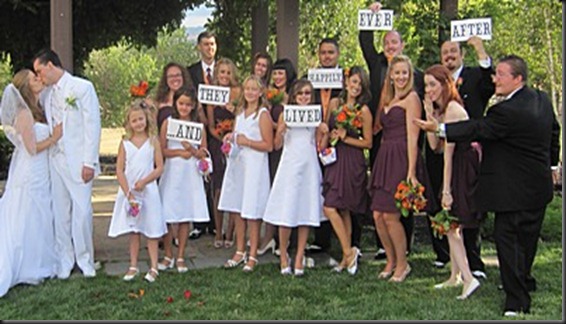 The clocks on my computer 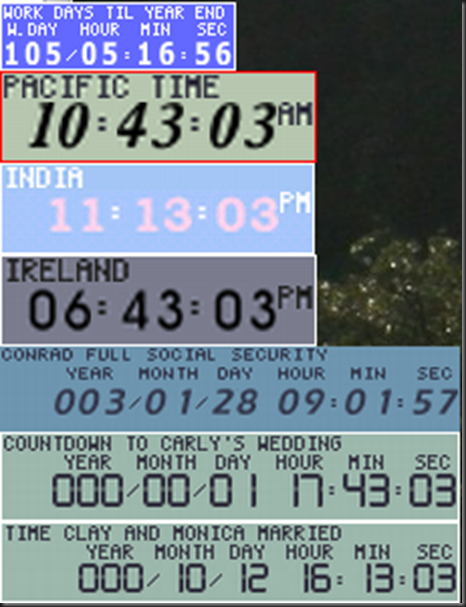 These clocks in one corner of my computer give a hint of my priorities, LOL!!!  I don’t know who this Clay and Monica and Conrad and Carly are, but in a dream, I think they are somehow relevant to me.

Anyway, photos and observations from Lafawnda and Flash’s wedding – which was absolutely everything any of us hoped for! - will be filtering in for awhile, so be patient.  In the meantime, I am taking my family to see parts of the Bay Area and will fold that in, too!

In the meanTIME, time marches on …

Oh, and that countdown to Lafawnda’s Wedding will now need to change to say how long married!!!

I am sure this topic will be dealt with differently by other members of the LBC and please check them out.  I will when I have time.  But, right now I am consumed by …

But, it is distinctly different.  Everyone wins.  No competition.  For … there is no other team, no one to beat. 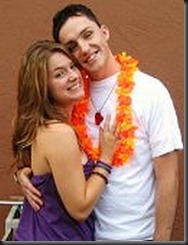 From Flower Girl to Bride 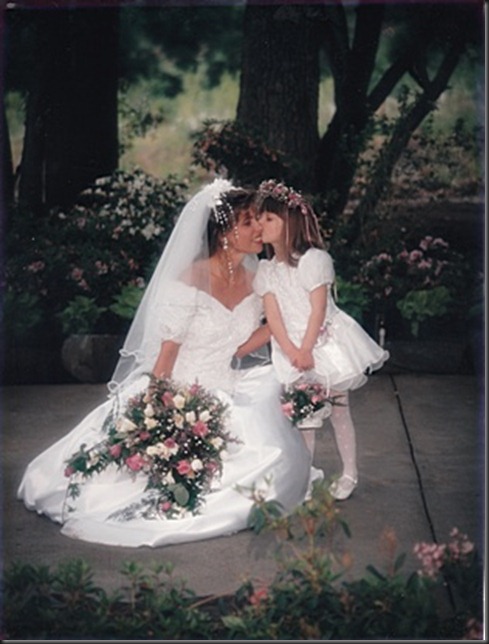 This is one of my favorite photos of Lafawnda.  She was the flower girl at cousin Heather’s wedding when she was four and this picture was taken after the ceremony.  This is real scenery, too, not a studio.