I have not been posting or making the rounds lately in the blogosphere and I want to give a bit of an explanation as to why.  I promised everyone a ways back that I had a surprise announcement and then was promptly upstaged by the birth of my newest little granddaughter!  How rude!

Everyone assumed that was the new announcement, but that one was scheduled for the second week in January and just came a bit early.  The good news is that Newbie Fossil is doing just fine and I am going to rename her Peanut Fossil at this stage.  It just fits her better!  But, back to my surprise announcement ...

I took a job!  There is a company that I did initial contract work for beginning in September of 1995.  Eventually, they hired one of my employees in 2001 to handle their needs onsite - and this was done with my blessing - and now they have run into some programming needs over the past year that I was best suited to help them with.   They then, at the end of the year, put together a package they offered me to see if I would come to work for them as an employee and it was definitely worth my time.

Give us this day our daily ... 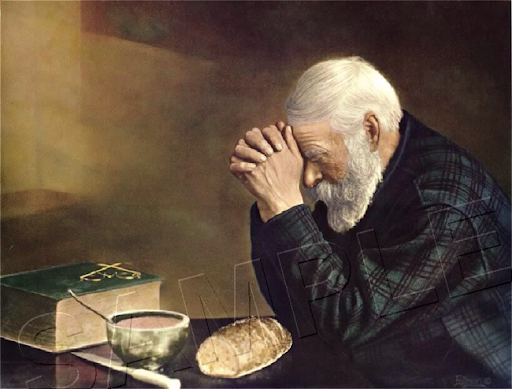 This painting hung on a wall in our dining room - or that of my grandparents, perhaps, before that - for as long as I can remember.  It is, of course, an old man in prayer, saying grace over that which he has received and that which he treasures, the items of true sustenance, food and the written word.  It is very Christian at its best, a beautiful visual portrayal of simplicity, humility and gratitude.

As children, we were taught The Lord's Prayer with its line, "Give us this day our daily bread." and I cannot count the number of times in my life I have repeated this prayer in private and in communion with others.  This, I assume, is the source of the topic brought to the LBC today (yesterday, really, but among friends ...) by Padmini.  It embodies a very interesting stance toward the world, saying that sustenance is not earned as capitalism portrays, but rather that it is a gift of the divine to be appreciated, a gift to be shared and multiplied in our caring one for another.

For those who cannot see their way past the fact that Christianity was incorporated here, it can be stated with some variation of meaning in a different context by Omar Khayyam in his Rubaiyat:

A Book of Verses underneath the Bough,

A Jug of Wine, a Loaf of Bread--and Thou

Beside me singing in the Wilderness--