Out of sight, out of mind! It’s so easy to be distracted.  When I was young, I would concentrate on one thing to the almost absolute exclusion of another.  I ate one item at a time on my plate.  If I was reading, the house could fall down around me without my noticing.

As I grew older, more people took control of my life and demanded my attention.  I had no problem in the classroom, for I found studying to be interested.  However, I could be a bit absent minded, pulling my childhood tendencies right along behind me in a little red wagon.

Older still, I started to view my focus in a more philosophical sense, learning the value of the moment in a more intellectual way.  Ironic that, because where I had just come from was what I was now seeking, I just didn’t realize it.  Besides, I had to make a living now!

Well, I’ve pretty much come full circle, but this time for biological reasons.  It used to be overly concentrating on a single thing that cost me the big picture at the same time it amped up my focus.  Now, the cause is from the other end of the telescope.  I am in the moment simply because I forget other things.  Welcome to living as a sexagenarian.

Yesterday, a customer asked me to do something for them at the end of the day because he was going to a ballgame.  I didn’t get too busy to do it.  I didn’t avoid it because I didn’t want to do it.  No … I simply forgot to do it!

Before I forget, this topic was brought to the LBC by Will Knott!  Check out the other writers and lets see what they have to say by clicking on their links on the right.

This week's topic was suggested to the LBC by Grannymar.  Check the gang out (links on the right), because it is always a good journey!

When you are young, you live in a variety of houses over time.  At least, I did.  I am talking about that period when you have left the nest, but haven't really formed your own nest yet.  The period when it is good to be unattached, when life is fluid and experimental, when you are figuring yourself out as an adult. It is a good stretch and there may be many memorable houses along the way.

Then you meet someone, someone special.  You start looking at the future, your career, a mate and children.  It is a big step.  You are preparing to build your own nest.  This is a totally different life focus and it profoundly changes you.  My son and his wife are now in that process and look at the almost completed result: 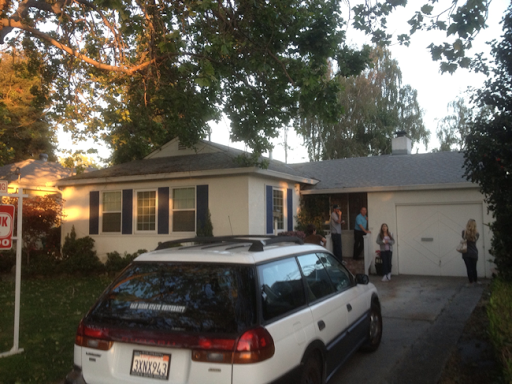 This is the house that their offer was accepted on!  They now just need to hope that the appraisal is high enough to cover the loan, but once that hurdle is passed, this will be the location of their new nest.

It is a tree lined street: 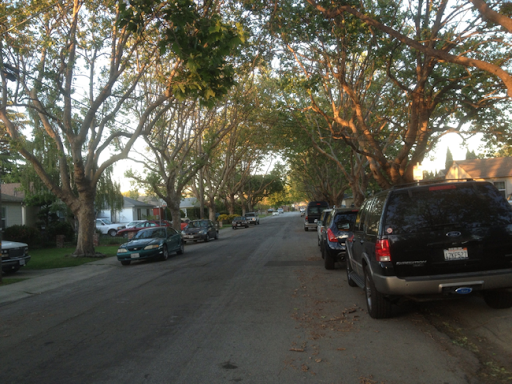 The back yard is great: 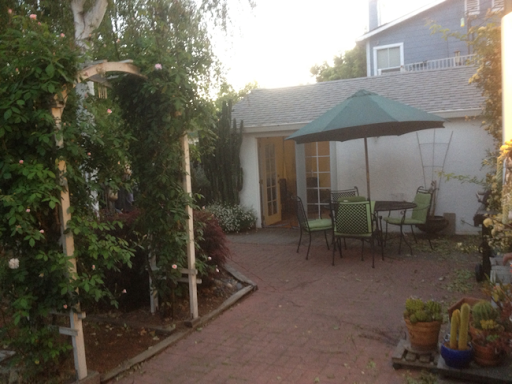 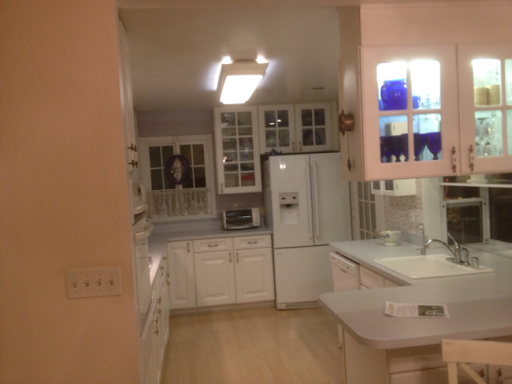 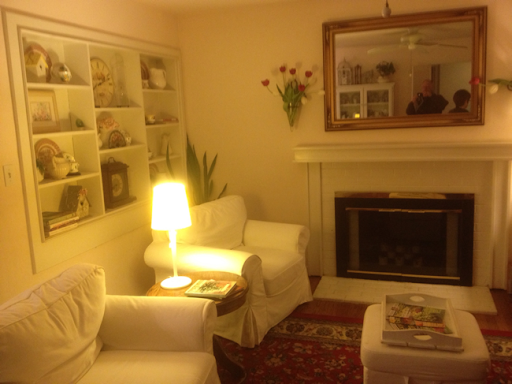 And what exactly does this have to do with names, which is our topic after all?  When you are footloose and fancy free, you live in a series of houses.  But, when it becomes the nest you have chosen and that you have put your fortune and your commitment and your plans into, the place to share with your mate and to start your expanding family, you call it a different name.  It isn't your house any longer.  My daughter-in-law invited us to come over and check it out this evening by saying, "Do you want to come see our new home?"

That is one important name change!

This topic was brought to the Loose Blogger Consortium for our Friday consideration by shackman.  Check his take and that of the other members by using the links on the right side.  I'm suspecting that the problem with this topic is not writer's block, but rather too many different things to say! 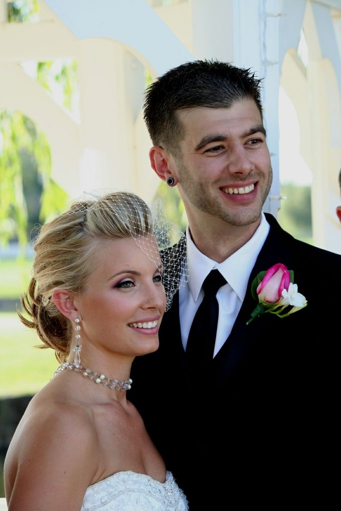 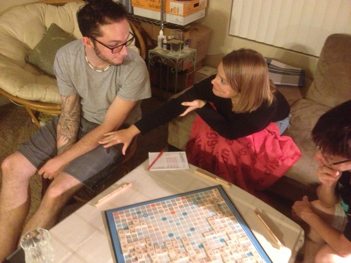 We are in that phase of life where our kids are taking the baton in the relay handoff.  My son and daughter-in-law are probably going to put an offer on a house they looked at yesterday.  My daughter and son-in-law will be moving to Fresno this summer for her Dietetic Internship.  And two of our best friends will bury their son, a Green Beret, tomorrow after his wartime death from a gunshot wound taken in battle in Afghanistan a couple of weeks ago.

These are the joys and terrors of having kids.  They take a piece of your heart and soul with them, but they can't give you a guarantee of how things will turn out.  You cheer them on, you share their heartaches ... and you ignore the terror of vulnerabilities they bring with them, the same terror we all brought to our own parents. 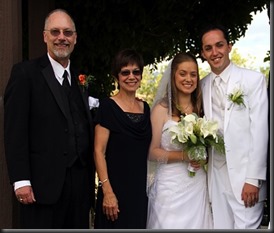 For the four people you see above, the world changes today in a really significant way at 4:00 PM Pacific Daylight Time.  Lafawnda and one of her best friends, Megan, have been in school together since their freshman year getting Bachelor’s Degrees in Nutritional Science.  Each could go out at that point as a qualified Nutritionist.  The final step in their initial education, though, is a Dietetic Internship and each has applied to numerous programs, some run by schools, some not.  After successful completion of that and subsequent qualification exam – kind of like passing the Bar – they will become Registered Dieticians.

Lafawnda has applied at programs in San Diego, Los Angeles, Fresno, San Francisco, Napa, Sacramento and Marin County.  All considered, it is nine separate applications to universities and medical facilities.  As the professors say each year, they are surprised at which graduates are accepted into which programs and which are not, so no guarantees here.  There are many applicants from across the country and only about ten or twelve are accepted into each program.  Each applicant ranks their choices and the top choice of the institutions accepting the person is the match they receive.  Or … they are not matched with any.

At 4:00 this afternoon, the matches will be announced.  Lafawnda and Megan are basket cases right now in anticipation.  They will text one another upon finding out their result so they can adjust their responses to each other accordingly.  The ultimate dream for both would be to find acceptance into the same program and we have already offered Megan that she can live here if both get into the program at San Francisco State.  Each possibility requires the appropriate reconfiguration of all lives involved and if Lafawnda is not matched with any program, then she and Flash have decided to move back here and stay with us as they determine what to do with their lives over the next year until Lafawnda would apply again.

This is a big deal for all of us and the Lady Fossil and I are also very excited.  In any case, no move will be made until this June after Lafawnda’s graduation in May.  We also don’t want to take away from the accomplishment of a stellar undergraduate performance by Lafawnda, graduating with honors and being one of only two students from her class to produce an undergraduate thesis based entirely upon her own research.

We are happy with our kids’ and their friends’ efforts and accomplishments and there is no outcome here that is bad.  Some are just delightful to contemplate, though!

We will keep you posted.

BREAKING NEWS!!: And the winner is …. FRESNO!!!  Woo Hoo!  The worst news is that Megan didn’t get a match this year and that is really difficult.  It makes this bittersweet.

This topic brought to the Loose Blogger Consortium - an adventurous collection of blogging pirates if ever I've seen 'em - was brought to us by one of our distaff stars, Padmini.  To see what she and the other members if the Consortium have to say on the topic, you can use the clickable links on the right side of this page!
I used to believe in finality.  I still do ... in a sense.  I believe in it as a local understanding, for we do experience it.  We experience it in all kinds of ways:

Getting a degree at school.  The finality of the good life!

I think that local perception is absolutely essential.  After all, who wants ANYTHING to last forever, when you think about it.  How boring.  It also gives us the edge that keeps us on our toes, for embracing our mortality is essential to carpeing the diem.
But, weird as it may seem, I ultimately no longer believe in finality.  Time travel ruined me, you see.
Read more »
Posted by The Old Fossil at 7:00 AM 9 comments: