I didn't move to the San Francisco Bay Area until the age of 29 and, oddly enough, besides my family and friends, the thing I missed the most was the extreme weather.  You would think that would be something that was a blessing, as all native Northern California residents believe, but it was actually the opposite.

In the summer, Kansas is a sauna.   In the winter, it is a refrigerator with wind.  I never tolerated the cold very well (I freeze!!!), having inherited those genes from my maternal grandfather whose ancestry was Irish, yet the same genes gave me a marvelous tolerance of heat.  Go figure.  Ireland isn't exactly the tropics, as Grannymar can attest.  Some of our relatives also say there is Cherokee blood in that line, which might explain it.

In the summers, I always worked in fields or doing physical labor jobs in hot places when I was in my teens and early twenties.  Working in the heat of a feed mill, they would put me up top in the warehouse pulling and stacking the 50 pound bags of feed, because the temperature up there would top 120 F and this would make the regular guy that did it sick.  I could do it all day long with no ill effects whatsoever and go out after work to drink prodigious amounts of 3.2% beer at the local tavern.  The only day I had to bail out was scooping grain with a power scoop from a railroad car when the temperature outside was 113 F and there was no telling how hot it was in the rail car.  The sweat poured off in a steady running stream, literally, and I finally had to tell the boss that I was fine but within the hour would not be!  He agreed and we shelved that task til the next morning.

When I was 39, I paddled a paddle boat all around Lake Havasu with my son for 2 1/2 hrs in 116 degree heat.  Again, no ill effects at all, just got tired legs and weary of being a human sweatball!  He was only nine and I couldn't get much work out of him.

That extreme heat tolerance led me to appreciate what I read this morning from a guy who lives in Death Valley.  He actually went jogging yesterday when the temperature was 127 F !!!  What caused him to stop was not the effect of the heat on his body, but that his running shoes were literally melting and falling apart.  Now, as they say, THAT is nuts. 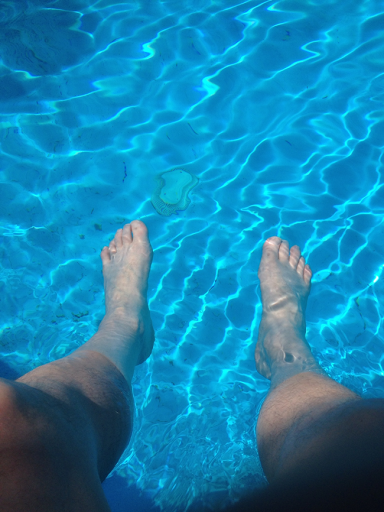 I'm far less nuts than once I was.  At least about heat.