This topic was brought to the Loose Blogger Consortium this week by our member, Will Knott.  Be sure to check out what he and the other members have to say about Secrets on their own blogs which you can conveniently visit by clicking on their links listed on the right side of the page.

While a boy growing up in Kansas in the 1950’s and 1960’s, I joined the Boy Scouts of America along with many of the other kids from town.  We even parade marched in front of former President Dwight David Eisenhower and future President Lyndon Baines Johnson in 1962 as part of the dedication of the Eisenhower Library.

We were proud to be Scouts and faithfully learned our knots and how to march somewhat in sync.  Every meeting, we repeated our Pledge of Allegiance to the Flag, our Scout Oath and Scout Law and worked on our Merit Badges.  We camped in the summer on a week-long retreat.  We had official uniforms, a secret left-handed handshake and saluted with three fingers.

On my honor, I will do my best
To do my duty to God and my country and to obey the Scout Law;
To help other people at all times;
To keep myself physically strong, mentally awake and morally straight.

No one ever did anything improper toward me while I was a Scout, nor do I know of anyone else involved in improper activity.  To me, some of the most reprehensible actions are those committed by a person who takes a position of trust and uses the power and authority of that position to violate those entrusted to his care and guidance.  I think this may be the reason I am so outraged when I hear of the sexual violation of youth by teachers or priests or – and this one is hot off the wires – Boy Scout leaders. 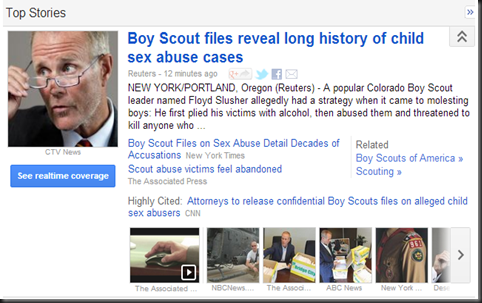 The damage done in these instances is incalculable for the individuals involved.  Kids afraid to speak up, for the very source they have been told is a moral authority is actually a predatory creature bent on sick gratification.  These are crimes so heinous that the other hardened prisoners in the penal system often exact their own version of frontier justice when no one else is around.

The damage done to the victims often is a disruptive force in their adulthood, causing a burden of bewilderment and confusion, guilt and shame, in a secret package sealed within that festers and then blocks healthy interactions, sometimes with mates left to wonder where the problem is that always seems to lurk below the surface.

There will always be these types of individuals in our world and I don’t expect them to be magically eliminated.  However, what disgusts me the most is an organization, whether it be the church or the Boy Scouts, that puts loyalty to its priests and leaders above service to recipients of its moral instruction.

An excerpt from the article:

In one case, the files show that after a volunteer in Texas was expelled when he confessed to molesting Scouts in 1965, a local Scouting official wrote to the national office and said a minister that knew the man "is doing his best to protect Boy Scouting and trying to keep this incident as quiet as possible.

"However, if some parents file charges, of course it will come out into the public."

The people in your care are ALWAYS your first priority.  Stopping abuse if it is discovered must be immediate and those abusers must not be protected from society’s sanctions and justice.  Immediate care for the abused must be initiated at the expense of the organization, regardless of the embarrassment or expense.  Any organization unwilling to unflinchingly stand up for these responsibilities immediately in the light of day should be disbanded.

To their credit, this also was indicated about Scouts as it currently stands:

The organization currently requires even suspected cases of child molestation to be reported immediately to law enforcement officials, conducts criminal background checks, and prohibits one-on-one contact between an adult and a Scout. The group now rigorously trains volunteers and leaders to spot signs of abuse.

On the news, they said that almost all of these cases were beyond the statute of limitations and that these revelations were more embarrassing than anything else.  Embarrassing?  No, it’s much worse than that.  It is a misplaced mockery of morality and care.  It is, in fact, a crime.

Quotations from an online article by Chris Francescani and Teresa Carson